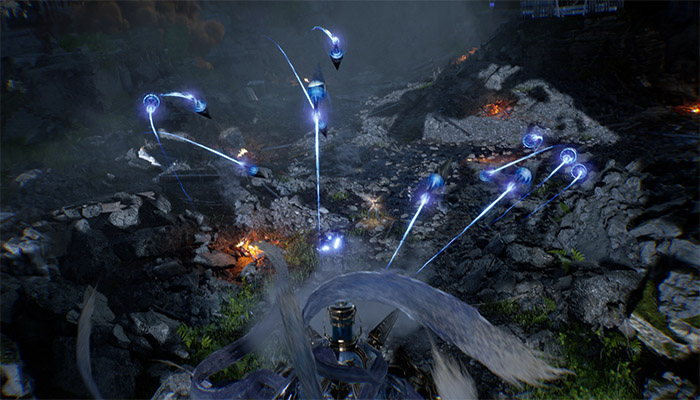 The First Descendant is an upcoming third-person co-op shooter looter. It will be free-to-play and will be available on Xbox One, Xbox Series X and Series S, PlayStation 5, and Microsoft Windows when it launches sometime in 2023.

The game will feature high-quality AAA-level graphics and immersive combat wrapped around a solid backdrop that reveals mysteries as players proceed through the title.

The First Descendant will enter an open beta stage later this month. Players can test the gameplay, and mechanics, and fight a few bosses before the title releases next year.

We got to test the open beta a few weeks before it becomes publicly available. Thus, we will cover the current state of the game, its hits, and misses, in this review.

The First Descendant is a third-person looter shooter. The game delivers on these aspects as it has been built around shooting hordes of enemy troops. The players get to experience the action from a third-person follow-around camera perspective.

Being a shooter, the game features a variety of weapons to choose from. Players can equip up to three weapons that best suit their play style. Apart from the weapons, users also have four special abilities that can help them survive or wreak havoc on the battlefield. These special abilities vary among the various characters to choose from, dubbed Descendants in the game.

Add to this, players can also use melee to cause extra damage to enemies within close quarters. Different descendants will showcase a unique animation although the damage and execution remain the same.

The game has a total of 10 characters or Descendants to choose from. The list includes Ajax, Lepic, Viessa, Ultimate Lepic, Jayber, Bunny, Freyna, Gley, Sharen, and Blair. Each character has its pros and cons on the battlefield. In my testing, Ajax suited my playstyle the best. However, the answer will be different based on what players prefer.

The game has an intricate fast-travel system built into it right from the beginning. However, the loading times and animations do get a bit jaggy and impact the immersion by quite a margin.

The game is set in a sci-fi futuristic Earth where alien forces challenge the existence of human civilization. The powerful aliens, called Vulgus, defeated the humans a century before the events of the game. After the Vulgus, came the Colossi, who destroyed even more of the civilization.

After decades of fighting a losing battle against the otherworldly forces, humans were gifted the powers of the “forgotten ancestors.” A new military class was born, called the Descendants. Players get to play as Descendant in the game. The humans now have to fight against Karel, the new leader of the Vulgus who had dark ambitions.

Players get to play in different destroyed cities and landscapes of the old continent which was once inhabited by humans.

The combat and mechanics are the main highlights of The First Descendant. The game has been centered around combat. Gamers will mostly find themselves shooting hordes of enemies or moving around the map completing objectives.

The game has included some key mechanics that make both traversing and fighting enemies easy. The grappling hook is immensely helpful while it also provides a competitive edge in combat.

The developers have paired all of these mechanics with smooth animations that have been well baked in the title. This provides for an immersive gameplay experience. Even in an early build of the game, I did not encounter any game-breaking or annoying bugs, which is a big win for the developers. The experience will only improve with time.

The boss fights are a main highlight of The First Descendant. The game has a bunch of bosses to fight as a part of a four-player co-op experience.

Unlike most games, the bosses in the game mix and match various techniques to make the fights extremely tricky, confusing, and enjoyable. Although the first couple of bosses were extremely easy, it took us quite a few chances to beat the last three bosses available in the Open Beta.

The First Descendant features high-quality AAA-level graphics. Thus, it is no wonder that the title is a bit demanding on PC. The official Steam page lists at least an Intel i5-3570 / AMD FX-8350 coupled with 8 GB RAM and GeForce GTX 1050 Ti or AMD Radeon RX 570 to play the game at the lowest settings at 1080p.

At the Very Low settings preset, the game would easily get over 80 frames with an 1% and 0.1% numbers higher 60 frames per second. Using the Low preset does not tank the framerate by a huge margin and the numbers drop to around 70 FPS on average with 1% and 0.1% numbers crumbling to around 50-55 FPS.

However, turning the settings up to Medium takes a huge toll on the framerate. The average metrics dropped to the mid-40s with the 1% and 0.1% numbers dropping to below 30 FPS.

In the High and Very High presets, the game was not playable at all. The average framerates dropped to less than 20 FPS.

However, the best experience could be derived by using custom settings in the game. Customizing the game ensured that it was visually appealing while delivering steady 60+ FPS.

Overall, The First Descendant seems like an interesting entry in the looter shooter sub-genre. The title packs immersive experience and solid gameplay in one. Alongside, the game also comes with high-quality graphics.

Although the game takes huge inspirations from other successful IPs in the industry, it is a fun experience. The game is worth a shot.

Coral Island: Can you Customize your Character?