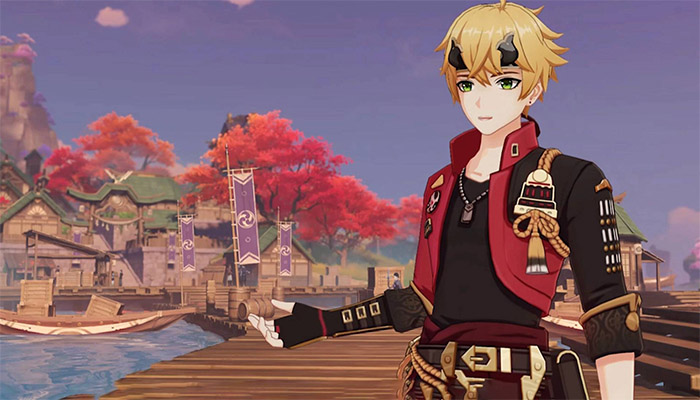 Genshin Impact Version 3.0 is out and Dendro reactions are popping off all over Teyvat now that the element is released. Despite Pyro being one of the elements that does react with Dendro, it isn’t as much favoured as Hydro or Electro as companion elements to Dendro.

Burning isn’t a reliable or useful reaction and that just leaves us with Burgeon which does nuke AoE damage. Burgeon while being a cool reaction still lacks proper units to carry out. While the Traveler is a reliable Dendro applier and there are plenty Hydro units for Bloom reactions, there aren’t any reliable Pyro units for Burgeon- except Thoma.

Thoma is an underrated shielder but even more so he’s a reliable Pyro applier and since his Pyro application is slow and reliable, he is the one triggering the reactions. This doesn’t necessarily mean he’ll be your main-dps. You can use Hydro main-dps units for the Blooms and still have Thoma’s shield and AoE Pyro pulses trigger Burgeon.

Since Dendro reactions largely scale off of EM, this means Thoma will have to be built with EM as his main stat. This does sacrifice his HP-reliant kit and makes his shields less reliable but you can always be on the lookout for HP% and Flat HP substats in the artifacts. You also don’t need to worry about CRIT since this reaction does not Crit and only scales off of EM and character level. His best-in-slot sets for a Burgeon build are as follows:

Even though the Instructor is a 4-star set, it’s still amazing on Thoma as he can consistently buff his teammates with more EM which is always good for increasing overall team damage. If you don’t have complete reliable sets of the above two sets, you can also mix and match 2-pieces of the above sets with 2-piece Wanderer’s Troupe. 4-piece of Wanderer’s is not viable as the 4-piece bonus doesn’t benefit Thoma in any way.

His best-in-slot weapons are all 4-stars with two of them being craftable too:

If his EM needs have been met you can also use the HP% spear Black Tassel which is a 3-star but it does the job of bolstering his HP needs a little. You can also use ER weapons to have a full up-time on his elemental burst.

As for his 5-star options, they’ll all be good on him as long as they give him HP, ER or synergise with his kit- but we don’t recommend 5-star weapons on him as they are much better used on your other characters. Thoma’s shielding while being reliable still doesn’t compare to Zhongli’s and since most people have already built Diona, the only reason to build Thoma now would be for his Burgeon role. And for that role, the above build suffices.

As an English Masters graduate, I always dreamt of becoming a writer as a profession. Alas! I was led astray by anime and gaming. I enjoy open-world RPGs that encourage exploration with easy but flashy combat along the way. Art and aesthetics also matter immensely to me so even in games my characters tend to stare off into space. If I’m not gaming or watching anime I’m probably just asleep and dreaming.