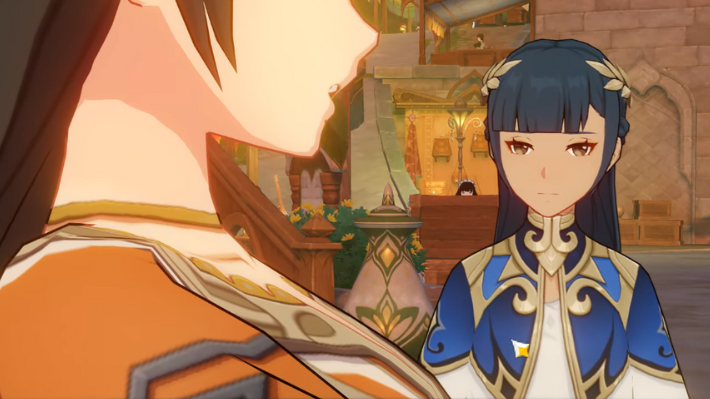 While venturing through the new area in Sumeru, you will meet various new NPCs and solve new quests. One of the quests you can complete is the Like a Triumphant Hero Archon Quest, which is where you have to help Nahida gather some information from other NPCs. In it, you have to use Nahida’s mind-controlling powers on three NPCs who will talk to Sataria and make the researcher believe that they are firm supporters and followers of the Scarlet King, aka, King Deshret. In this guide, we will see how to answer Sataria in Genshin Impact 3.1.

All Correct Answers to Give Sataria in Genshin Impact 3.1

The Like a Triumphant Hero is the first quest that you will acquire in Chapter III Act III Archon Quest: Dreams, Emptiness, Deception. Here we will see all the correct answers to give Sataria in Genshin Impact 3.1.

In the quest Like a Triumphant Hero, you have to help Nahida gather information about the sages in the Akademiya and stop their ploy, the same way when they tried to ruin the Sabzeruz Festival. She has decided to tail Sataria, one of the scholars in the Akademiya, and possess three NPCs who Sataria will be interacting with and choose the favorable answers. To start the quest, talk to Katheryne in Sumeru City, who is actually controlled by Nahida. Below are all the answers you have to select to answer Sataria’s questions correctly, and the NPC to who she will talk.

Finally, the last NPC you have to control is Rima, but you can select any option to continue the quest. Now, all that is left is to follow the rest of the questline with Nahida and check the outcome.

That’s all there is to know about all answers to give Sataria in Genshin Impact 3.1. If you like this guide you can check out our other guides as well.

Escape From The Hospital Achievement in Genshin Impact 3.1 – How to Get